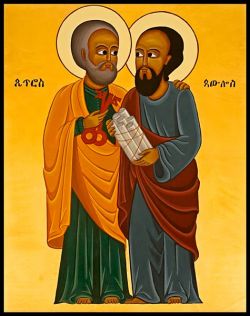 THE ICONS OF BOSE, Peter and Paul

Today the Eastern and Western churches celebrate the solemnity of the holy apostles Peter and Paul. According to an ancient tradition, they were martyred on this day in Rome in the year 64.
Peter "our father," as the Coptic liturgy calls him, was a fisherman from Bethsaida in Galilee. His brother, Andrew, introduced Peter to Jesus. A privileged witness of the Transfiguration and of Gethsemani, Peter was asked by Jesus to reconfirm his brothers after he experienced God's mercy at the moment in which his denial was forgiven. It was Peter who, by a revelation from the Father, confessed Jesus as the Messiah, the Son of the Living God. Peter was also the apostle who guided the first Christian community in bearing witness to the Risen Christ. He welcomed pagans into the Church and announced the Gospel as far as Rome, where he was martyred. Origen attests that he was crucified upside down like a slave.
Paul, whom the Coptic liturgy calls "our master," was a native of Tarsus in Cilicia, and was brought up in the Jewish faith according to the tradition of the Pharisees. After recognizing Jesus as the Messiah, he became the proclaimer of the Gospel to the gentiles and travelled through Asia Minor and Greece, facing dangers and constant toil and carrying with him his concern for all of the churches. He was a Roman citizen and was decaptitated in Rome, according to tradition, on a street called Via Ostiense.
The feast of the apostles Peter and Paul was already being celebrated in Rome on today's date by the middle of the fourth century.

Lord God,
today we celebrate the martyrdom of your apostles:
Peter, the Church's foundation,
and Paul, the missionary among the gentiles.
Grant that your Church
may walk faithfully in their footsteps
and accept suffering on account of its witness to Jesus,
your Son, who lives for ever and ever.

COPTS AND ETHIOPIANS (22 ba'unah/sane):
Dedication of the church to Sts Cosmas and Damian (Coptic Church)