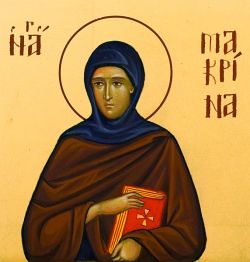 THE ICONS OF BOSE, Saint Macrina

Today the Eastern and Western churches commemorate Macrina, a monastic of Cappadocia.
The elder sister of Basil of Caesarea, Gregory of Nyssa and Peter of Sebaste, Macrina decided at the age of twelve not to marry, so that she could dedicate herself to a life of humble work and prayer and seek the unification of her heart. Her brother Gregory, who became her biographer, rightly presents her as the one who inspired the rest of the family - her mother, the servants, and her brother Basil - to join her in living the monastic life.
After Macrina and those with her had explored several different possibilities, they created a double monastery, where men and women lived a short distance from one another. Their one intention was to live according to the Gospel in celibacy and community, working with their hands, sharing what they had with others, and offering hospitality to all those who visited them.
Macrina died at the age of fifty-three, after spending her life guiding her community as its mother. Before she died, she thanked God for having opened the way of resurrection to humanity, and asked him to accept her life as an offering, 'as incense rising before him.'

Lord, eternal God,
your servant Macrina
chose to follow your Son, Jesus Christ,
in monastic life,
to the point of sharing his cross:
we ask you to free us from the fear of death
and to make us capable of living
so that our brothers and sisters
may have life in fullness,
in peace and Christian joy.
Through Christ our Lord.

ANGLICANS:
Gregory (d. 394), bishop of Nyssa, and his sister Macrina, deaconess, teachers of the faith