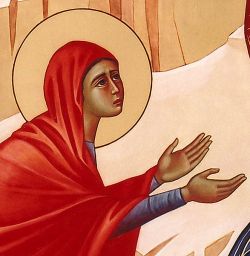 THE ICONS OF BOSE, Mary Magdalene

Mary Magdalene Equal to the Apostles

A native of the city of Magdala on Lake Tiberias, Mary Magdalene was freed by Jesus' word from the seven evil spirits that possessed her, and followed the Lord everywhere he went. She served him faithfully all the way to the Passion and became a witness of his death and burial.
When the Sabbath was over, Mary carried spices to the tomb with the other women, a gesture which earned her the name of "myrrh-bearer." The risen Christ appeared to her first, calling her by name as she wept in the garden. Mary ran to give the news to the disciples, becoming the "Apostle of the Apostles," as tradition calls her.
In the West, Gregory the Great and others after him identified Mary Magdalene with the woman in Luke's Gospel who, although her sins were many, was forgiven because she had loved much. Mary came to be seen as a woman who knew a great deal about sin, but just as much about love; a disciple who wept over her sins and her Master's death, waiting and keeping watch.
An example for those who repent and for those who keep a long and patient vigil because they have been touched by the flame of divine love, Mary Magdalene has been an important figure for every movement of Church reform, and especially for the monastic reforms that blossomed in the eleventh-century West.

God our Father,
your risen Son entrusted
the first Easter announcement
to Mary Magdalene,
whom you had made a new creature:
grant that we also, in communion with her,
might proclaim Christ risen
and contemplate him one day in your glory,
for he lives and reigns now and forever.

ORTHODOX CHRISTIANS AND GREEK CATHOLICS:
Mary Magdalene, myrrhophore and equal to the apostles