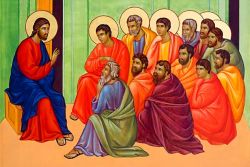 THE ICONS OF BOSE, Jesus and his disciples

Today the Western churches commemorate the Lord's apostle James of Zebedee.
The Gospels tell of how Jesus, walking along the Sea of Galilee, saw James of Zebedee and his brother John in a boat, repairing their nets. He called them, promising to make them fishers of men, and they "left the boat and their father and followed him."
James was one of the first disciples to be called, and he, John and Peter were especially close to Jesus. They witnessed the raising of the daughter of Jairus, the glory of the Transfiguration, and the agony of Gethsemani.
James had an impulsive character, which earned him the nickname "son of thunder." Transported by ardent love verging on jealousy for Jesus' sake, he had to be restrained from calling down fire from heaven on those who refused to welcome Jesus. Together with his brother, he asked to sit at his Lord's right hand in glory. Jesus then explained to them the price of this privilegium amoris: they would receive it only by sharing in his cup and being immersed in his death. James did in fact become the first of the apostles to follow Jesus in violent death: he fell under Herod's sword in Jerusalem in the year 42, shortly before Easter.
In the Coptic Church, James is commemorated on April 12 (which corresponds to our April 25), and in the Byzantine churches his feast falls on April 30. The traditions regarding his preaching in Spain and his body being found in Compostela date back to the seventh and eighth centuries.

Rejoice, O James: when you were young, you asked for the place of honor in an earthly kingdom; when you became a man, you were made worthy of the place of honor next to the Lord of glory.
Rejoice, you who saw the Word with your own eyes and contemplated him, for you left your fisherman's trade to begin to fish for men. You exchanged your desire of an earthly kingdom for desire of the kingdom of heaven, your ephimeral heritage for the perfect heritage, the riches that pass away for the riches of heaven that will never fade.

(Nicetas David, from the Fifth Discourse)

Lord God,
you called James
to leave his belongings and his family at a moment's notice
in order to follow Jesus,
and to become the first of the apostles to die for you:
increase our willingness to do your will,
and to be your witnesses even unto death.
Through Christ our Lord.

LUTHERANS:
James the Greater, apostle; Thomas of Kempis (d. 1471), witness to the faith in Netherlands