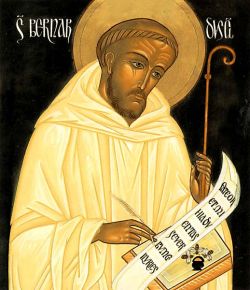 THE ICONS OF BOSE, Saint Bernard

In 1153, the Cistercian monk Bernard died in the abbey he had founded at Clairvaux.

Born in 1090 in Fontaines, near Dijon, Bernard felt drawn to monastic life at the age of twenty-one. He convinced about thirty relatives and friends to join him, and they all entered the New Monastery, which had been founded at Cîteaux a few years earlier by several monks who had left the monastery of Molesme to lead a life of greater faithfulness to the Rule of Benedict.
The impetus Bernard gave to the Cistercian reform did much to broaden monastic horizons. In 1115 he was already abbot of the new foundation of Clairvaux, and he soon began to found monasteries throughout Europe, more than seventy in all.
A strongly charismatic man who radiated kindness and an ability to love and be loved, Bernard interpreted the search for God, which the Rule of Benedict calls essential to monastic life, as a gradual passage from memoria Dei to presentia Dei in a monk's heart. This transition takes place, according to Bernard, when the word of God is welcomed in faith, and when brothers pursue the arduous but joyful practice of fellowship in community. Bernard's reinterpretation of the Rule of Benedict centered around his view of the monastery as a "school of love."
Bernard was assiduous in listening to Scripture, and all of his theology was a commentary on the Word in which, taking up the tradition of the Church fathers, he gave voice to his own experiences of the human meeting the divine. These experiences, which he called "visits of the Word," inspired his Sermons on the Song of Songs, a striking literary testimony that he left unfinished.

Good Father,
your Son Jesus manifested himself to Bernard
not by sight but by the force of his secret presence,
and Bernard recognized the presence of Christ.
Grant us the same grace of wonderment,
and according to our faith
we will be able to discern the hour
in which we are visited by the Word,
Jesus Christ our Lord.

WESTERN CATHOLICS:
Bernard, abbot and doctor of the church (Roman and Ambrosian calendars)