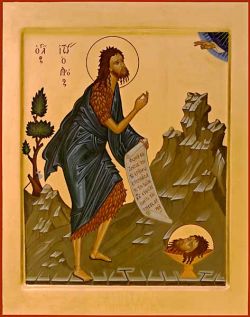 THE ICONS OF BOSE, Martyrdom of John the Baptist

Martyrdom of John the Baptist prophet

The martyrdom of John the Baptist is commemorated today by the Eastern and Western churches.

The Baptist's activity reached its climax when he shed his blood, paying the price for remaining faithful to his mission until the end.
The king Herod Antipas and his wife Herodias did not allow the Baptist to continue denouncing their transgression of the Law. After John was arrested and imprisoned at Macheronte on the eastern shore of the Dead Sea, he was killed in the most senseless way imaginable when a guard decapitated him at the whim of Salome, Herodias's daughter. As during his lifetime, so in his death John was the last and greatest of the prophets. His life was an epilogue to the tragic story of God's messengers, who had always been rejected by the people to whom God had sent them.
After the Transfiguration, Jesus said, "Elijah is indeed coming and will restore all things; but I tell you that Elijah has already come, and they did not recognize him, but they did to him whatever they pleased. So also the Son of Man is about to suffer at their hands" (Matt 17.11-12). The rejection and death of John the Baptist, who was turned into a plaything in the rash hands of the powerful, prefigured Jesus' own rejection and death. This is why the early Church began to commemorate John's martyrdom almost immediately, on a date that follows the celebration of his birth on June 24.

Few people truly understand the spirit of the Forerunner. It is easier to be attracted to the spirit of the beloved disciple, who rested his head on Jesus' heart and whose joy we would like to share; who among us has not felt this desire? Too often, the Baptist remains alone. His strength, gentleness and tenderness are not understood; they are too hidden and are borne in silence and suffering. We pass him by without knowing him, because he himself withdraws. But to penetrate the mystery of his heart and make him loved...
John the Baptist did not rest on his Master's heart, but he understood him in his solitude and showed others the way to him. He did not want to delight in the Master for himself, but discreetly stepped aside. His personality was too strong; it would have disturbed the gentle intimacy of Jesus and the beloved disciple. He vanished, content with his secret, happy to have sensed something of the Master's heart, upon which someone else, less broken by life, would rest (a Carthusian).

Almighty God,
you willed that John the Baptist
be your Son's forerunner
in his preaching of the coming kingdom
and in his death for the sake of justice and truth:
grant us his strength and perseverance
so that our own witness to the faith
may lead us to give the gift of our entire lives.
Through Christ our only Lord.

ANGLICANS:
The beheading of John the Baptist

WESTERN CATHOLICS:
The martyrdom of John the Baptist (Roman and Ambrosian calendars)

LUTHERANS:
The beheading of John the Baptist
Martin Boos (d. 1825), preacher of the revival in Rhineland

MARONITES:
The beheading of John the Baptist

WEST SYRIAN ORTHODOX:
The beheading of John the Baptist

OLD CATHOLICS:
The beheading of John the Baptist