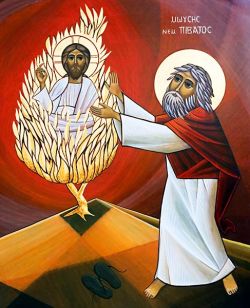 THE ICONS OF BOSE, Moses and the firing bush

Moses (2nd millennium BCE) prophet
Moses, a friend and prophet of God, is commemorated today in the ancient calendars of the Eastern and Western churches. The first Christians recognized Jesus as the new Moses

Moses, a friend and prophet of God, is commemorated today in the ancient calendars of the Eastern and Western churches. The book of Sirach has this to say about Moses:

From (Jacob's) descendants the Lord
brought forth a godly man,
who found favour in the sight of all
and was beloved by God and people,
Moses, whose memory is blessed.
He made him equal in glory to the holy ones,
and made him great, to the terror of his enemies.
By his words he performed swift miracles;
the Lord glorified him in the presence of kings.
He gave him commandments for his people,
and revealed to him his glory.
For his faithfulness and meekness he consecrated him,
choosing him out of all humankind.
He allowed him to hear his voice,
and led him into the dark cloud,
and gave him the commandments face to face,
the law of life and knowledge,
so that he might teach Jacob the covenant,
and Israel his decrees (Sir 44.23-45.5)

Moses, whom the Torah calls a "friend of the Lord" and "prophet," probably lived in the thirteenth century BCE, and died at the threshhold of the promised land. The Torah closes with the story of his death: "Moses, the servant of the Lord, died there in the land of Moab, on the mouth of the Lord" (Dt. 34.5), and comments, "Never since has there arisen a prophet in Israel like Moses, with whom the Lord spoke face to face, as a man speaks with his friend" (Dt. 34.10).
Before his death, Moses announced to Israel, "The Lord your God will raise up for you a prophet like me from among your own people; you shall heed such a prophet" (Dt. 18.15). Because of these words, the first Christians recognized Jesus as the new Moses, the prophet who had ushered in the end times by giving the Torah its definitive, messianic interpretation.

God of our fathers,
through Moses you gave Israel the Law,
and you confirmed your people
in your blessing and promise:
grant us the peace and messianic joy that await,
and lead all people to full participation
in the mystery that has been hidden
from the world's foundation:
resurrection from the dead
in Jesus Christ our Lord.

LUTHERANS:
John Mollio (d. 1553), witness to the point of bloodshed in Italy