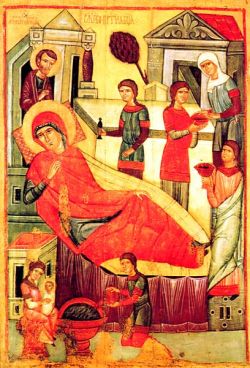 The birth of the virgin Mary

The birth of the virgin Mary
This feast is a celebration of the birth of the woman who became "earth of heaven" - in other words, the fertile terrain offered by humanity so that the Word's Incarnation might take place in human history

The birth of the virgin Mary

Today Eastern and Western churches celebrate the birth of Mary, the mother of Jesus.
As had happened with John the Baptist, whose nativity began to be commemorated in the West at the end of the fourth century, the early Church felt that a solemn celebration of Mary's birth was called for.
September eighth was chosen because it was the date of the dedication of St. Anne's basilica in Jerusalem. The church was built on the site where Mary's parents Joachim and Anne had lived, according to an ancient tradition.
The feast of Mary's nativity spread to Constantinople in the fifth century, and was introduced to the West in 701 by Pope Sergius I, who was of Syriac ancestry. Much loved by the Eastern and Orthodox churches, it is a celebration of the birth of the woman who became "earth of heaven" - in other words, the fertile terrain offered by humanity so that the Word's Incarnation might take place in human history, fulfilling God's plan of salvation.

Holy Mary,
mother of the Lord,
your faith guides us.

Turn your gaze
towards your children,
Earth of heaven.

The road is long and night descends upon us:
intercede with Christ for us,
Earth of heaven.

(Byzantine-Slavic hymn to the Mother of God)

Lord our God,
you gave us Mary, the new Eve
and fertile terrain you prepared
to welcome your Spirit
and bear the fruit of the Messiah:
grant that we may confess with our entire lives
the mystery of the union of your divinity
with our humanity in your Son,
our only Lord.

In 1148 William of St. Thierry, a Cistercian monk, died in Signy, France.
Born into a noble family of Lièges around the year 1070, William began his literary studies in northern France, where he learned the traditional method of biblical exegesis called quaestio.
Increasingly convinced that he would find the word of God contained in Scripture only if he liberated himself from the erudite approaches taught in theological academies, William entered the Benedictine monastery of Saint-Nicaise in Rheims in 1113. He had understood that God is present in the human heart through the Spirit, well before the human intellect begins to seek him. As he continued his monastic journey, William found much of value in the rigorous methods he had learned in the academy, and went on to become one of the greatest spiritual figures, and perhaps the greatest poet of God's love, in the entire Middle Ages.
Around the year 1120, he was elected abbot of the Benedictine monastery of St. Thierry, but he did not hide his admiration for the Cistercian way of life. Earlier, he had met Bernard of Clairvaux, and the two had become close friends and collaborators. It was Bernard himself who dissuaded William from leaving St. Thierry to join the Cistercians, and William worked instead to reform his own monastery. But in 1135, unable to resist any longer, he became a simple Cistercian monk at Signy. There he had ample time to continue writing his theological and spiritual works, which reached a vast public.
As his health failed, he began to write a Life of Bernard as a last gesture of love towards his friend of Clairvaux, but he died before completing it, on September 8, 1148.

ANGLICANS:
The birth of the blessed virgin Mary

ARMENIANS:
The birth of the blessed virgin Mary

MARONITES:
The birth of the blessed virgin Mary

ORTHODOX CHRISTIANS AND GREEK CATHOLICS:
The birth of our Lady the most holy Mother of God

WEST SYRIAN ORTHODOX:
The birth of the blessed virgin Mary

EAST SYRIAN ORTHODOX:
The birth of Mary, the Mother of God

OLD CATHOLICS:
The birth of Mary