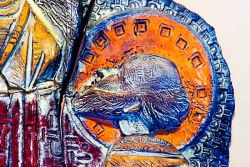 Today the Eastern and Western churches commemorate the apostle and evangelist Matthew.
Levi Matthew, son of Alpheus, was a tax collector in Capharnaum. When he was called by Jesus, who was beginning to preach in Galilee, Matthew was among those who left everything - his home, brothers and sisters, father and mother, friends, work, and possessions - to follow the Lord.
The Gospels tell of how Matthew the tax collector gave a farewell banquet for his friends, tax collectors and sinners like him. Jesus came to Matthew's house and joined in the feast, showing that he had come into the world not for the righteous but for sinners.
Traditionally, Matthew has been considered the author of the Gospel that bears his name. This Gospel was addressed to people from Jewish backgrounds who had come to believe in Jesus as the Messiah. It was probably written several years after the Gospel according to Mark.
As a scribe who had become a disciple of the kingdom of heaven, Matthew was able to bring forth both the new and the old from his storeroom, in response to the dilemmas his community faced after the destruction of the Jerusalem Temple. In Matthew's Gospel, Jesus is presented as the new Moses whose divine authority allows him to communicate the will of the Lawgiver himself, thus completing God's revelation on Mt. Sinai.
According to tradition, Matthew preached the Gospel in Syria or Ethiopia.

God of love,
through your Son, you called Matthew
to leave behind his security and wealth
and become an apostle:
grant your faithful the grace
to follow Christ in heartfelt repentance,
poverty in spirit, and mercy towards all.
He is our Lord and lives and reigns
forever and ever.

ORTHODOX CHRISTIANS AND GREEK CATHOLICS:
End of the feast of the exaltation of the Cross
Quadratus of Magnesia, apostle