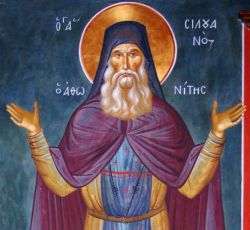 MONASTERY OF SIMONOPETRAS, Silouan of Athos

In 1938, Starets Silouan died in his monastery on Mt. Athos.
Semën (Symeon) Ivanovich Antonov was born in 1866 in Sovsk, Russia, into a poor peasant family. In 1892 he went to Greece and entered the monastery of St. Panteleimon on Mt. Athos. His monastic parable was an extraordinary attempt to become docile to the action of the Holy Spirit. From childhood Silouan had been aware of the Spirit's presence in his heart, and he decided to devote himself entirely to prayer as a way of treasuring the gift he had received. He was named steward of his monastery, but continued to set apart a considerable amount of time each day for prayer, although he had over two hundred monks for whom to provide.
As the Spirit taught him to recognize Jesus and see the Father's mercy in him, Silouan sought an ever closer identification with his Lord. He knew that only humility would allow him to see himself as a "wasteland," a fragile human being consumed by sin, and so reach full communion with Christ, whose love for all people had taken him to the depths of hell.
After a personal experience of desolation in which he was pulled back from the brink of despair by the Lord's voice, which he heard repeating, "Keep your spirit in hell and don't despair!", Silouan became a spiritual guide who was able to take the burdens of others upon his shoulders because he had been consoled by God in his inner heart. He spent the last years of his life receiving thousands of people, who came from far and wide to ask "Starets Silouan," as everyone now called him, for a word or a prayer.

Abba Paisius was praying for one of his disciples who had denied Christ. As he prayed, Christ appeared to him and said, "Paisius, for whom are you praying? Has he not denied me?" But the saint continued to have compassion on his disciple. Then the Lord said to him, "Paisius, you have become like me through your love."

(A saying of the desert fathers that Silouan liked to repeat)

Merciful God,
you poured out your Holy Spirit
upon Silouan of Athos,
so that he descended to hell in spirit
without despairing,
and you gave him love for his enemies:
for the sake of his testimony,
grant that we too may sing of your love
in this life and beyond death,
for ever and ever.