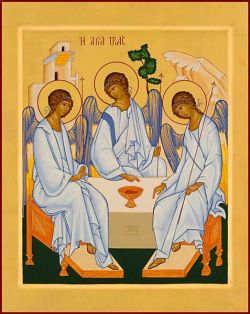 THE ICONS OF BOSE, Trinity

Today the Western churches commemorate the Lord's angels and messengers.
A verse of the Letter to the Hebrews summarizes the biblical view of angels, calling them "spirits in the divine service, sent to serve for the sake of those who are to inherit salvation" (Heb 1.14). In both the First and the New Covenants, God entrusts angels with the task of making his will known to the people of Israel, or to individuals he has chosen for a special mission.
It is true, as Paul reminds us, that "there is one God; there is also one mediator between God and humankind, Christ Jesus, himself human" (1 Tim 2.5). Still, the Christian churches have always acknowledged the role played by God's messengers in the saving design of the Word. In the New Testament, angels are given the responsibility of announcing the Son of God's Incarnation, of watching over him during his life on earth, of proclaiming his resurrection, of explaining his ascension, and of accompanying him in his glorious return.
According to early Eucharistic prayers used in the Eastern and Western churches, God's messengers celebrate an unending liturgy before him in heaven. The Church's liturgy on earth does no more than join with this heavenly liturgy in proclaiming God three times holy.
As the Church entered the modern age and began to reflect on many aspects of its faith, Christian denominations developed different teachings about the role angelic spirits play in watching over the Church's temporal life and the lives of individual believers. These divergences still await study and clarification.

God of light,
you entrusted the angels
with the ministry of unceasing praise in your presence,
and you made them your messengers to humanity:
grant us pilgrims on earth
the protection of the creatures of heaven,
and with them in your kingdom
we will contemplate the glory of your face forever.
Through Christ our Lord.

ANGLICANS:
Michael and all the angels

COPTS AND ETHIOPIANS (19 tut/maskaram):
Third day of the glorious Cross

LUTHERANS:
Michael, archangel, and all the angels

WEST SYRIAN ORTHODOX:
Arrival in Egypt of Severus of Antiochia

OLD CATHOLICS:
Michael and all the angels