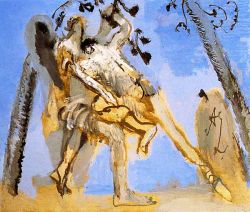 ALBERTO GIANQUINTO, Jacob and the Angel

Words of Spirituality
by ENZO BIANCHI
If we want to fight evil effectively, we have to fight within ourselves and defeat the evil that is in us

The spiritual struggle is an essential aspect of Christian spiritual life. The Bible asks believers to prepare themselves to encounter opposition. Just as we are called to “have dominion” within creation, we are also called to dominate ourselves and the sin that threatens us: “Sin is a demon lurking at the door: his urge is toward you, yet you can be his master” (Genesis 4:7). This struggle is an interior one, not directed against those around us but against the temptations, thoughts, suggestions, and inner processes that lead us to consume evil. Paul, using images related to war and athletics (running and boxing), speaks of Christian life as a fight, a sort of inner tension that allows us to remain faithful to Christ, and that involves an unmasking of the processes by which sin gains control over our hearts so that we can fight it at its source. Our heart, in fact, is the site of the battle. In Biblical anthropology, the heart is the organ that best represents life in its totality: as the center of the ethical and inner life, the intelligence and the will, the heart contains all of the elements that constitute what we call the ‘person’ and is similar to how we define ‘conscience.’ The Christian spiritual struggle, however, is in no way limited to a psychological process of discernment and adjustment. It is, as Paul tells us, “the fight of faith” (cf 1 Timothy 6:12), the only fight that can be called “good.”

It is a struggle generated in us by our faith - that is, our bond with Christ revealed in baptism - and undertaken in faith, with trust in the victory Christ himself has already accomplished. It is also a struggle that helps us maintain and strengthen our faith.In the Christian tradition, the spiritual struggle is intended to protect the believer’s ‘spiritual health.’ If the goal is apátheia (from the Greek a-pathos, absence of suffering) this is not intended as impassibility, but rather as absence of pathologies. This understanding of apátheia reveals the therapeutic value of faith at work in the spiritual struggle. Since the spiritual life is a life that is extremely concrete and real, it needs to be nourished and strengthened in order to grow, and it needs to be protected when its integrity is threatened. The Christian traditions of both East and West have identified and described in detail the areas in which Christians struggle spiritually in order to maintain a healthy attitude - in other words, an attitude of communion and not consumerism. In the monastic tradition, it has always been said with force that the life of faith consists in a continuous struggle against temptation. Antony, the ‘father of monks,’ said, “The greatest thing a man can do is to throw his faults before the Lord and expect temptation to his last breath.” But what is ‘temptation’? The word ‘temptation’ designates a thought (the Greek fathers spoke of loghismoí), suggestion, or stimulus that reaches us either from outside ourselves (what we see or hear, our surroundings) or from within ourselves (from our own psychology, our past, our own personal areas of weakness), and that insinuates in us the possibility of acting in a way that contradicts the Gospel.

Many of those who attended catechism classes as childen remember the list of the ‘seven deadly sins,’ widely taught in the Catholic Church from the Counter-Reformation onward but attributable to St. Gregory the Great, who spoke of pride, envy, anger, despair, greed, gluttony, and lust. His list was actually a reformulation of the list of ‘eight evil thoughts’ composed by Evagrius Ponticus in fourth-century Egypt and later published in Latin by John Cassian. If we re-read these ‘sins’ today, leaving behind the moralistic and legalistic context in which they have been passed on to us and interpreting them instead as ‘relationships,’ they become startlingly relevant (many have seen in them a form of pre-pschycoanalysis), and we can grasp the deep and profoundly simple spiritual insight that inspired them. Evagrius speaks first of gastrimarghía (gluttony), which concerns not only our relationship with food but any form of eating disorder or imbalance (we might think of anorexia and bulimia). Porneía (lust) indicates a lack of balance in our relationship with sexuality, and in particular the tendency to treat our own body or another person’s body as an object, to let ourselves be ruled by our impulses, and to reduce to an object of desire a person called to be a subject in a relationship of love. Philarghyría refers to greed, but on a deeper level it asks us to look closely at our relationships with the objects that surround us, and it challenges our tendency to let ourselves be defined by what we own.

Orghé (anger) can distort our relationships with others to the point of violence, and as Christians we are called to undertake the long and difficult struggle (in other words, the ascetic effort) of learning to accept alterity in our relationships. Lýpe indicates sadness or despair, but also the frustration we experience when our relationship with time is out of balance and when we are not able to live in a unified way in the time granted to us. Torn between nostalgia for the past and the desire to escape into an imaginary future, the victim of spiritus tristitiae is incapable of living fully in the present. Akedía (which does not appear in Gregory the Great’s latinized version of Evagrius’ list, probably because it is combined there with despair) indicates laziness in the form of taedium vitae, a total lack of motivation that in its extreme form can become suicidal. It takes the form of extreme instability, disgust with the way one lives, denial that one’s life has meaning, and an inability to live in a harmonic relationship with space. Kenodoxía (arrogance, vainglory) is the temptation to define ourselves by what we do, by our work, by what we produce or accomplish. It concerns our relationship with “doing,” with action. Finally, ýperephanía (pride) is hýbris in our relationship with God. It is the pride that leads us to exalt our ‘ego,’ to substitute our ‘I’ for ‘God.’

These areas, in which every human relationship finds a place, are the “battlefields” of the spiritual struggle. It is not difficult to see that the spiritual struggle seeks to guide the Christian toward personal maturity and the full expression of his or her freedom. Vigilance and attention are the “effort of the heart” (Barsanuphius) that allow the Christian to purify his or her heart. The evil intentions that come from the heart are what defiles, and it is our heart that becomes the dwelling place of Christ through faith. “Guarding the heart” (phylakè tês kardías) is therefore the spiritual person’s task par excellence, the only task that is truly essential. But how is it done? Thanks to the impressive amount of ascetic literature on the subject, from Augustine’s De Agone Christiano to the writings of Evagrius Ponticus and John Cassian to Lorenzo Scupoli’s (1530-1610) well-known treatise Spiritual Combat, we can describe in detail the process by which temptation develops in the human heart, a process we need to interrupt and defeat by means of an inner struggle. This process has four fundamental steps or stages: suggestion, dialogue, consent, and passion (or vice). Suggestion is the moment in which our heart first considers the possibility of committing a harmful action. We can discern the negative character of the thought from the fact that it generates a certain agitation in our heart, disturbing our peace and serenity. This moment is absolutely universal: no one is exempt from it.

If we engage the thought and enter into dialogue with it, and if we neutralize (by attempting to justify ourselves) the unease and agitation the thought generates in us, it gradually becomes a presence in our heart that we can no longer dominate and that overcomes us. At this point we consent - in other words, we make a personal decision that contradicts the will of God. If we begin to consent repeatedly because we have no ability to struggle, we become enslaved by a passion (a vice). This basic process can, on the other hand, be interrupted by a struggle that, if we begin it immediately, allows us to destroy these thoughts or suggestions at their source. Again, what form does this struggle take, in pratical terms? Opening one’s heart in the context of a relationship with a spiritual mentor is essential, as are prayer and invocation of the Lord, listening to and interiorizing the Word of God, and living a life in which relationships and intense, genuine love are central. The spiritual struggle also requires that we ‘watch ourselves’ and exercise vigilance with regard to all of our relationships, since it is in our relationships that temptation - which we can also call the possibility of idolatry - tries to get a foothold.

The forms temptation can take are many, and they reveal themselves in every one of our fundamental relationships: our relationship with food, with our body and our sexuality, with objects (in particular, with money and what we own), with others, with time, with space, with ‘doing’ and working, and with God. Each of these areas of our life, which together define our human and spiritual identity, needs to be ordered and disciplined by means of a spiritual struggle. In all of these areas, temptation tries to seduce us into living with consumerism, instead of communion, as our rule. This is why the Eucharist, which celebrates life lived in communion with God and with those around us, teaches us a great deal about struggling against temptation. In the spiritual struggle we need patience and persistence. We need to know, first of all, how to discern the tendencies that lead us in the direction of sin, and we need to be able to identify our own areas of personal fragility and weakness and what is negative in us. We then need to name these things and accept responsibility for them, rather than ignoring or repressing them. Finally, we can begin the long and difficult struggle that will allow the Word and the will of God to reign in us! The heart - intended biblically as the organ responsible more for our will and our decisions than for our feelings - is the site of the struggle.

If we want to welcome the Word of God in our heart, the ability to struggle spiritually, to learn “the art of battle” (cf. Psalm 144:1, 18:35) is essential. Without it, “worldly anxiety, the lure of riches, and the craving for other things intrude and choke the word” in our heart and it “bears no fruit” (Mark 4:19). Those with experience in the spiritual life know that this combat is more difficult than any external struggle, but they also come to know the fruit of peace, freedom, gentleness and love it produces. It is through the experience of struggle that faith becomes faith that remains, perseverance. And it is through struggle that our love is ordered and purified. Athenagoras, Ecumenical Patriarch of Constantinople, said, “If we want to fight evil effectively, we have to fight within ourselves and defeat the evil that is in us. It is a bitter war, this war against ourselves. I fought it for years and years, and it was terrible. But now I am disarmed. I am no longer afraid of anything, because ‘love drives out fear.’ I have been disarmed of the desire to get the better of others, to justify myself at the expense of someone else. No, I am no longer afraid. When we no longer possess anything, we have no fear. ‘Who will separate us from the love of Christ?’” Indeed, temptation, wrote Origen, “turns the Christian into a martyr or an idolater.”