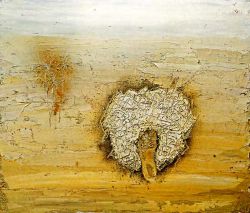 ...the desert, a place of death, represents in the Bible the necessary education of the believer...

“For me, the experience of the desert has been dominant. Between sky and sand, between Everything and Nothing, the question burns. Like the burning bush, it burns without being consumed. It burns for itself, in the emptiness. The desert is also the experience of listening, the extreme of listening” (Edmond Jabès). Perhaps it is this connection with listening that makes the desert, a ‘presence’ always rich in spiritual significance, so important in the Bible.

“For me, the experience of the desert has been dominant. Between sky and sand, between Everything and Nothing, the question burns. Like the burning bush, it burns without being consumed. It burns for itself, in the emptiness. The desert is also the experience of listening, the extreme of listening” (Edmond Jabès). Perhaps it is this connection with listening that makes the desert, a ‘presence’ always rich in spiritual significance, so important in the Bible. The desert, of course, is first and foremost a place, and it is a place that has different names in Biblical Hebrew: there is the caravah, the arid and uncultivated stretch of land that extends from the Dead Sea to the Gulf of Aqaba; the khorbah, which has a psychological rather than strictly geographical connotation and indicates a desolate wasteland, inhabited by forgotten ruins; the yeshimon, a solitary wilderness without roads or water; and most importantly, the midbar, a vast, flat, inhospitable expanse inhabited by wild animals, where the only plants are shrubs and thornbushes. The Biblical desert is almost never a desert of sand. It is a product of the erosion caused by wind and rare but violent rainstorms, and it is characterized by sharp fluctuations in temperature between day and night (cf. Psalm 121:6). Resistent to the presence of human beings and hostile towards life (Numbers 20:5), the desert, a place of death, represents in the Bible the necessary education of the believer, the process of initiation during which the group of slaves who leave Egypt become the people of God. In essence, it is a place of rebirth.

Wasn’t the world born as an ordered cosmos out of the chaos, the formless wasteland that existed before creation? In Genesis the earth, marked by absence and negativity (“At that time when the Lord God made the earth and the heavens ... there was no field shrub on earth and no grass of the field had sprouted, for the Lord God had sent no rain upon the earth” (Genesis 2:4-5), becomes, through creation, the garden prepared for humanity (Genesis 2:8-15). And isn’t the new creation, the Messianic era, described as a time when the desert will burst into bloom? “The desert and the parched land will exult; the steppe will rejoice and bloom. They will bloom with abundant flowers” (Isaiah 35:1-2). But between the first creation and the new creation stretches the creatio continua, God’s saving work in history. It is during this expanse of history that the desert becomes the site of God’s great revelations: in the midbar (desert), says the Talmud, God reveals himself as medabber, the one who speaks. In the desert Moses sees the burning bush and receives the revelation of the Name (Exodus 3:1-14); in the desert God gives his people the Law, meets with them and binds himself in a covenant with them (Exodus 19-24); in the desert he offers his people gifts in abundance (manna, quails, water from the rock); in the desert he reveals his presence to Elijah in “a tiny whispering sound” (1 Kings 19:12); in the desert he draws Israel, his bride, back to him after her betrayal (Hosea 2:16), and renews his marriage covenant with his people...

This gives us an idea of the fundamental semantic bipolarity, negative-positive, of the desert in the Bible, which embraces the three general symbolic areas to which the desert refers us: space, time, and the journey. The hostile space of the desert must be crossed before we can reach the promised land. Time, in the desert, is long but has an end - it is an ‘intermediate’ time of waiting, hope and longing. There is a long and difficult journey, beginning with a departure from slavery and ending with an arrival in a land that is welcoming, a land of ‘milk and honey’: this is the desert of the exodus! The spaciousness of the desert - arid, monotonous and silent - reverberates in the believer’s inner landscape as trial and temptation. Was the exodus worth it? Wouldn’t it have been better to stay in Egypt? What kind of salvation is this if we are hungry and thirsty, and if every day offers us the sight of the same horizon? It is not easy to accept the fact that the desert is an integral part of salvation! Israel puts God to the test in the desert, whose vast emptiness turns out to be a terrible scrutiny, a revelation of what inhabits the human heart. “Remember how for forty years now the Lord, your God, has directed all your journeying in the desert, so as to test you by affliction and find out whether or not it was your intention to keep his commandments” (Deuteronomy 8:2). The desert is an education in self-knowledge, and perhaps the journey undertaken by Abraham, the father of believers, in response to God’s invitation, “Go forth!” (Genesis 12:1; the Hebrew can also be translated, “Go towards yourself”) captures the spiritual significance of the journey through the desert.

The desert is the site of rebellion against God, complaints, and grumbling (Exodus 14:11-12; 15:24; 16:2-3, 20-27; 17:2-3, 7; Numbers 12:1-2; 14:2-4; 16:3-4, 20:2-5, 21:4-5). Jesus also experiences the desert as a necessary form of novitiate or preparation for his ministry: his face to face encounter with the power of satanic illusion and the attraction of temptation reveals that his heart is attached to the Word of God alone (Matthew 4:1-11). Strengthened by his struggle in the desert, Jesus can begin his public ministry. The desert also appears in the Bible as an ‘intermediate’ time, a ‘time between’: one can travel through the desert, but not settle there. Forty years, forty days: this is the ‘time of the desert’ for the people of Israel during their journey, but also for Moses, Elijah and Jesus. It is a stretch of time that can be endured only if we learn to be patient, to wait and to persevere, accepting the high price of hope. Perhaps the immensity of time in the desert is already an experience and foretaste of eternity! But the desert is also a journey. We must continue to go forward without ‘deserting,’ despite the temptation to regress and the fear that pushes us to turn back and choose the security of slavery in Egypt over the risk of the adventure of freedom - and this freedom is to be found not at the end of the journey, but during the journey.

In order to set out, we need to travel lightly - the desert teaches us to recognize what is essential and is an apprenticeship in reduction and simplification. It also educates us in faith by sharpening our inner vision, giving us an eye that penetrates, and making us vigilant. A man or woman of the desert is able to recognize the presence of God and denounce idolatry. In John the Baptist, man of the desert par excellence, everything is reduced to the essential - in him we find a ‘voice that cries out’ and calls for conversion, a hand that points toward the Messiah, an eye that searches deeply and discerns sin, a body carved by the desert, an existence transformed into a journey toward the Lord (“In the desert prepare the way of the Lord!”, Isaiah 40:3). His food is frugal, his clothing reveals that he is a prophet, and he himself decreases in front of the one who comes after him. He has learned well the desert’s economy of diminution. But he has also experienced the desert as a meeting place, a place of friendship and love: he is the friend of the bridegroom who stands next to the bridegroom and rejoices at the sound of his voice. The Biblical desert leaves us with this ambivalence. We can see it as a figure of the ambivalence of human life, the believer’s daily experience, and the contradictory experience of God himself. Perhaps Henri le Saux was right in saying, “God is not in the desert. It is the desert itself that is the mystery of God.”