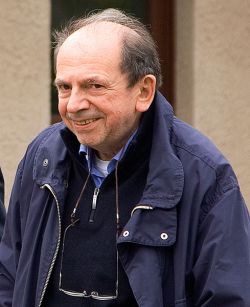 
“Jesus came, stood in their midst, and said: Peace be with you!” (Jn 20,19). We have listened to the principal Christian message, the announcement of Jesus’ resurrection, the announcement that love is stronger than death (cf. Ct 8,6). Because Jesus’ resurrection means this: that Jesus, “having loved to the end, to the utmost” (Jn 13,1) those that he had met and among whom he had lived, could not remain a prey of death, as Peter says in his first speech after Easter (cf. Ac 2,24). For this, God raised him up, so that it might appear to all people that there is a possible conqueror of death: love.

Here we are before a man, a Christian, a priest who has died. He is here in our midst, he is the celebrant of this liturgy in which is manifested his paschal exit from this world to the Father. It is don Luigi who before God, in judgment before the Lord, presents his life and of his life especially the interwoven relations, the capacity of love, of friendship. It is don Luigi who today becomes the witness of the fact that love conquers death. Don Luigi has always spoken and written of this mystery of our faith, he has lived it as priest, in his ministry, in particular here in this parish. His faith was enveloped by great solidity and serenity. And if, especially through his love of literature and his studies in this field, he has known and shouted man’s words that at times are desperate (in Cioran, Camus, Canetti, and many ore that he read and studied), his faith-adhesion, simple and always marveling like a child’s, nevertheless planted confidence in those who listened to him.