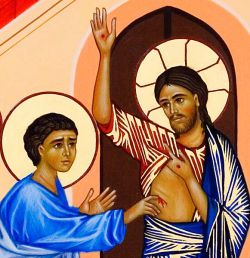 THE ICONS OF BOSE, Thomas and the Risen Jesus

Thomas, called Didymus, is most frequently spoken of in the Gospel of John, where he often appears in connection with the great mysteries of Christ's glorification.
Thomas was capable of ardent love for Jesus, as when at the moment of Lazarus' death he urges the other disciples to go together to die with the Lord. But he is also presented as the type of the believer who doubts, and who can only walk towards the fullness of faith by listening to and accepting the testimony of the community.
His question, "Lord, we do not know where you are going; how can we know the way?" gives Jesus the chance to formulate one of the highest christological revelations in the New Testament: "I am the way, the truth and the life." Notwithstanding the greatness of this revelation, Thomas does not believe the testimony the other disciples offer about the Resurrection, and demands to see what his ears have heard. Only a further revelation made by Christ, who condiscends to Thomas' weakness and shows him the signs of the passion that still mark his risen body, leads Thomas to confess his faith with the words, "My Lord and my God." Jesus responds to this confession by proclaiming the true beatitude of Christians: "Blessed are those who have not seen and yet believe."
According to Eusebius of Caesarea, Thomas evangelized Persia. Another ancient tradition claims that he preached on the western coast of India, and for this reason Malabar Christians consider him the founder of their church. Traditional sources claim that Thomas was martyred in India by a local king.

Father of believers,
the apostle Thomas, despite his doubts,
recognized Jesus as his Lord and God:
increase our faith,
and we will experience the beatitude
of those who believe without having seen.
Through Christ our Lord.