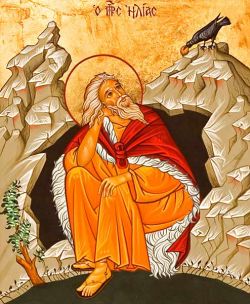 THE ICONS OF BOSE, Saint Elijah

On July 20, Christians of all traditions commemorate the prophet Elijah. As the Gospel story of the Transfiguration suggests, Elijah is the key representative of the Jewish prophetic tradition, and this is how the churches have always seen him.
In Israel, a prophet was a person who spoke in God's name, appealing to his listeners to renew their faithfulness to the God of the covenant. Elijah fulfilled this mission by letting his entire life reveal God's pathos, his fatherly care for his children, especially the smallest and most defenseless.
This was the ninth century BCE, a time of crisis and turmoil, and Elijah was outraged by the idolatry many in Israel were practicing. But God intervened and called him to detachment and solitude, apparently wishing to show Elijah that if he wanted to become a 'man of God,' he had to serve God's Word and wait for its coming in silence.
Elijah was sent into pagan territory, where he discovered that he needed to be fed by God and also by the poor, in the person of the widow of Sarepta. When he returned to his own country, his condemnation of the idolatry and injustice of the powerful led to his notorious confrontation with the prophets of Baal on Mount Carmel. But the persecution he suffered after his short-lived victory over the idolaters helped him understand, as he listened to the silent voice of God speaking to him on Horeb, that his God was not only a consuming fire, but was also peace, silence and tenderness.
Renewed by this experience, Elijah concluded his mission in the northern kingdom and was taken up to heaven in a whirlwind, according to the biblical account, whose message to listeners is that Elijah's spirit is still present in Israel.
In both the Jewish and Christian traditions, his return has always been associated with the coming of the Messiah.

Lord our God,
in the first covenant, you spoke to your people
through Elijah and all the prophets:
you admonished the powerful,
defended the poor and weak,
and announced the coming of the Messiah.
Grant your Church, by the power of your Holy Spirit,
the gift of new prophets
capable of announcing the demands of the kingdom with force
and of reminding believers
of the glorious coming of our Lord Jesus Christ,
who lives now and forever.