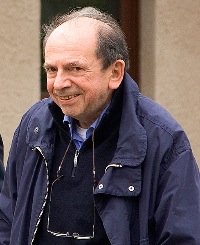 
“Jesus came, stood in their midst, and said: Peace be with you!” (Jn 20,19). We have listened to the principal Christian message, the announcement of Jesus’ resurrection, the announcement that love is stronger than death (cf. Ct 8,6). Because Jesus’ resurrection means this: that Jesus, “having loved to the end, to the utmost” (Jn 13,1) those that he had met and among whom he had lived, could not remain a prey of death, as Peter says in his first speech after Easter (cf. Ac 2,24). For this, God raised him up, so that it might appear to all people that there is a possible conqueror of death: love.

Here we are before a man, a Christian, a priest who has died. He is here in our midst, he is the celebrant of this liturgy in which is manifested his paschal exit from this world to the Father. It is don Luigi who before God, in judgment before the Lord, presents his life and of his life especially the interwoven relations, the capacity of love, of friendship. It is don Luigi who today becomes the witness of the fact that love conquers death. Don Luigi has always spoken and written of this mystery of our faith, he has lived it as priest, in his ministry, in particular here in this parish. His faith was enveloped by great solidity and serenity. And if, especially through his love of literature and his studies in this field, he has known and shouted man’s words that at times are desperate (in Cioran, Camus, Canetti, and many ore that he read and studied), his faith-adhesion, simple and always marveling like a child’s, nevertheless planted confidence in those who listened to him.

We cannot but recall his intense search of relations between faith and literature, his collaboration with the San Fedele cultural center and with the journal Letture. Nor can we forget his various commentaries for the festive Biblical lectionary, in which, in entire fidelity to Biblical inspiration, he knew how to open horizons of light for all, Christians and non-Christians, through very short expressions, almost aphorisms, words like “arrows” (iacula), always full of tenderness, of mercy, and of patience.

I would like, however, to recall above all don Luigi’s humanity, that is, his spirituality, which appears in his books. Words said in freedom and of freedom, words of his intimate diary (never chronicles!), which shows how his life was always inhabited by friends, a true communion in friendship. He was so solitary, but never isolated, never alone! Certainly, these friends are all here now. Yes, we are here: those that are already gone, such as David Maria Turoldo, Camillo De Piaz, Nazareno Fabbretti, Ernesto Balducci, Abramo Levi, Michele DO, and we who are here present: I, a friend of his and of all those I have named, Angelo Casati, and so many others among you!

We have lived his friendship, this balsam in our life as travelers in search of a land that is always distant, we priests and monks who like to sing, as we used to do with don Michele Do, “Where there is charity and friendship, there is God!” All of us friends who liked to come together, to speak heart to heart, to listen to each other, to be together at table. How many times, speaking of the things of God, which are those of man, we listened to the words, the apophthegms of don Luigi, always a song to life, to good wine, to fragrant food… Don Luigi used to call us here, to Santa Maria al Paradiso, also for his people, for you his daily friends, and as long as he was pastor I used to come every year. For me it was something rare: in all these years I accepted to come to Milan for meetings only to him, to don Angelo Casati at San Giovanni in Laterano, and to Erminio De Scalzi, bishop and abbot of the basilica of St Ambrose.

There was the miracle of friendship when we were together here or in Bose or in Saint Jacques di Champoluc, to look with smiles into each other’s eyes. That friendship made us speak of the Church sometimes with joy, especially in the Council’s decades; later we often spoke of it with suffering, because our love for the Church was and is great, essential, decisive. We knew and know that “the real Church is not the one we are ready to denounce,” as don Luigi used to say.

Don Luigi spoke to us, but he still speaks; he prayed for us, but now he prays for us still more; he rejoiced with us, but now he rejoices still more, in a communion that he feels more truly and more profoundly than we can feel. At this eucharistic table, the same on earth and on heaven’s altar, he is still at table with us and says to us: “Communicantes in unum”.

I want to conclude with a prayer that don Luigi wrote at the end of his L’abito rosso:

Lord, look, we are here.
At this point of the journey that you know.
Do not leave us alone, abandoned to ourselves.
Do not leave us lost.
"Now let your servant go in peace",
because the hour has come. 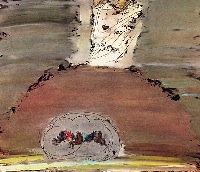 Bose, 6 August 2010
Homily by ENZO BIANCHI
Listen to the homily delivered for the monastic profession of brother Nimal, sister Elisa, and sister Francesca 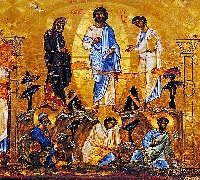